After 24hours + travel I was warning Pat that this better be worth it and so far so good!

We spent the first day resting and just wandering around the opulent part of town watching all the suave Jordanians with their pristine Dishdāshahs (the long tunic they wear) and perfectly ironed Turban and the women in incredibly elegant Burkas.  We went to the Blue Mosque

and somehow I did not manage to look elegant in my burka!. Picture not attached!  Many thanks to David of ‘Departures Travel’  for arranging an excellent Hotel (Rotana ) which not only provides a very good service but also is dominant in the sky line so we can’t get lost. 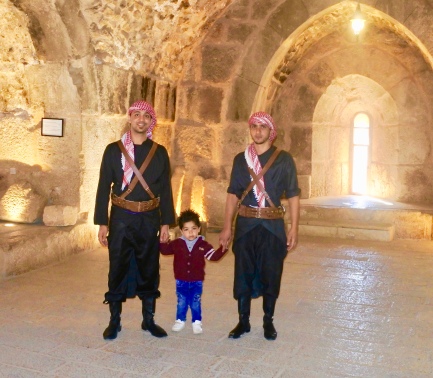 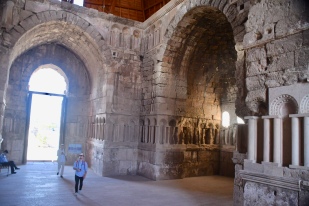 rits.  Full of bustle and hustle but not stopping them from shouting WELCOME to us.

Our guide Emad took us to the Citadel with the 2nd century Temple of Hercules, an Ancient Inn, a Fort  where Laurence of Arabia negotiated.  The door of the fort is made of stone and and weighs well over a ton.

Built by the Romans and the door could be easily pushed closed by me because of its hinges.
Finally  a 15th century mansion where the Kings younger son who was into girls and hunting.

The friezes could be seen depicting his interests !   All of these buildings are in incredibly good shape but the photographs do not seem to do them much justice.   A quick bite to eat with local food and then home exhausted.

Today we visited Jerash. This is a world heritage and unfortunately for Jordan, due to 9/11 and issues with Syria the tourist industry is not what it used to be.  It was nice for us though as there were not the crowds you see in other places.  It is the largest Roman ruin outside of Rome and truly fascinating architecture.  It dates as far back as 3500 BC but it was more developed by Alexandra the Great in 500BC There are four Byzantine Churches with Mosaic floors still clear and intact, a hippodrome where you can see where the gladiators fought.
Two theatres where you can see the seat numbers and family names who had reserved seats.  The sound system is such that you can stand in a specific spot and be heard by all 3 thousand sized audience. Of course I tested it !  There are also holes at the base where its like the whispering gallery in St Pauls and the guards or theatre staff could communicate all along the stage floor.  How did they figure that out so long ago?  The 63 columns are earthquake proof.  The Romans put iron bars into the columns  and they can move gently when pushed.  That’s demonstrated by a teaspoon Video unable to attach due to size

.
We went on to see Qalat Al -rabad fortress which is situated on a mountain top showing views from the Dead Sea to the Red Sea to the sea of Galillee.  fantastic views.
Tomorrow we are driving down the Kings way stopping at various sites on our way to the highlight PETRA

5 thoughts on “Travels in Jordan”