Skip to content
On arrival to Guilin there was the most beautiful aroma.  It is Osmanphus and apparently only blooms for one week every year.  Its gorgeous.  Ian is our Guide and he is very easy going and considerate as well.  He’s traveled quite a lot and is very intuitive to to travelers needs.  We decided to skip the tea ceremony as we’ve already had one and of course we bought the most expensive tea that will turn Pat into Bruce Lee equivalent and me into a healthy beauty queen.
We headed straight to a village which hasn’t changed for over two centurys.  The local pharmacy has snakes and turtle shells and other strange looking bones.  In the local Offy/liquor store we had to try the Cobra Wine which gives longevity and had the kick of a mule. 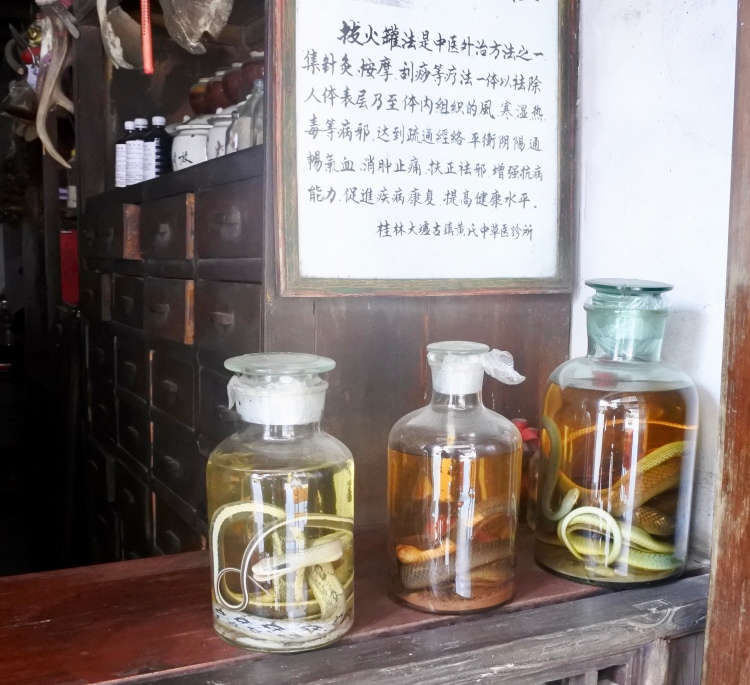 We later climbed the Fubo Hill and bumped into a lady from Gainesville and afterwards strolled around and watched all the local ladies dancing in the park. Its a delight to see.  There was also a small group of musicians playing Chinese music. It was woeful.  I think they probably think the same when they hear Irish diddilly dee music.  Our guide is now helping us order meals !
The drive to Longsheng was spectacular scenery. We climbed the rice terraces which took the wind out of me but these 60+ yr olds were carrying people in a rickshaw or luggage on their backs.
There are two types of Chinese minorities,  the Zhuang and the Yo.  The Zhuang women  only cut their hair once in their life, on their wedding day.  They have very rich black hair.
Our guide says that its the herbs they apply and that they never go gray.  Sure enough one of them came to me and offered to let me feel her hair and it is amazing. (Was meant to buy something but I gave her 5 YUAN instead which she seemed pleased enough with.)  The Yo have those beautiful silver head tiaras.  After the hike up we sat by the side and ate bamboo rice (sans maggots or slugs) watching rickshaws race past.
Our Li river cruise was amazing not just for the scenery but the fun we had with the Chinese girls wanting to get their photos taken with us and crying out ‘Hello’ to all the boats and us .  I was really touched at the end when one of the girls gave me a bottle of perfume that was on sale on the cruise and actually it smells very nice.
We landed to a crazy market,  a bit of a rest and Ian took us for dinner before the light show. 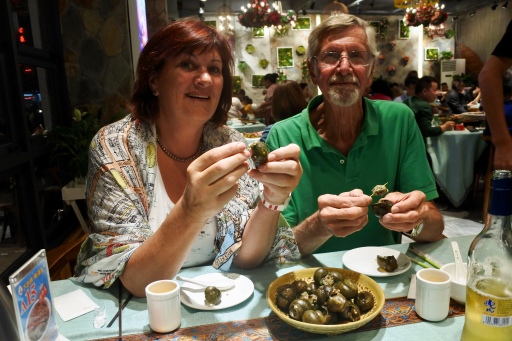 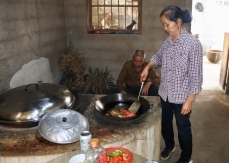 Lunch in family house with own tofu 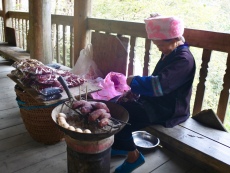 at the market
Snails, frogs and turnip toffee rolls, num num!
The specialty is beer fish which we picked out from the pool. ( I think Ian advised them to ditch the head and I noticed he ate the tail)  Delicious.  This place is a tourist area but very few Western tourists.  All Chinese.
I didn’t take any photos of the light show as they wouldn’t have done it any justice.  The backdrop were those mountains lit up and a cast of 1200.  We had great seats. 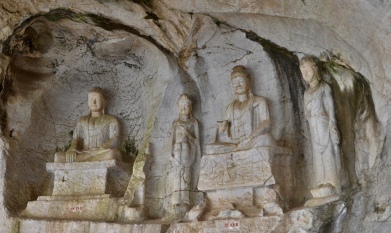 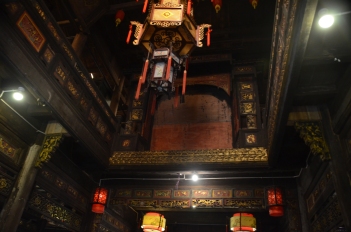 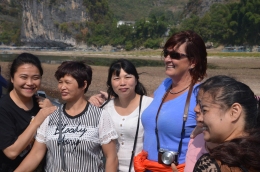 Me and my fans 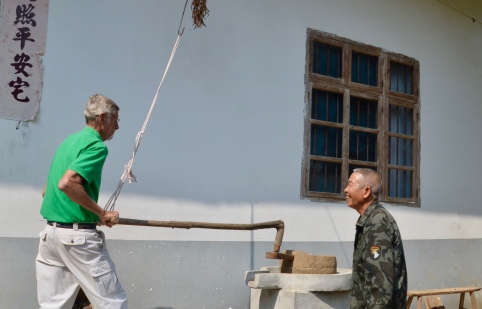 The morning was spent learning Thai chi from a master.  We are now experts!  And delightful day cooking with local farmers.  We decided to be courageous tonight and our guide took us to a restaurant where we had snails, frogs and the equivalent of turnip in hot toffee and I kid you not when I say it was scrumptious.